The Collaborative Work of Arts Facilitation

I began working for posAbilities as a casual staff in early 2010 at a variety of day programs, some arts-focused and some not. For the past year, I have had a permanent position at Alternative Creations Studio (also known as Alternatives) as an arts facilitator. Located in East Vancouver, it is a studio supported by posAbilities for people with developmental disabilities. Outside my work at Alternatives, I have been exploring a variety of art forms, ranging from photography, abstract painting and video art to sound design and vocal and electronic music. These artistic practices inform what I do at Alternatives to varying degrees. 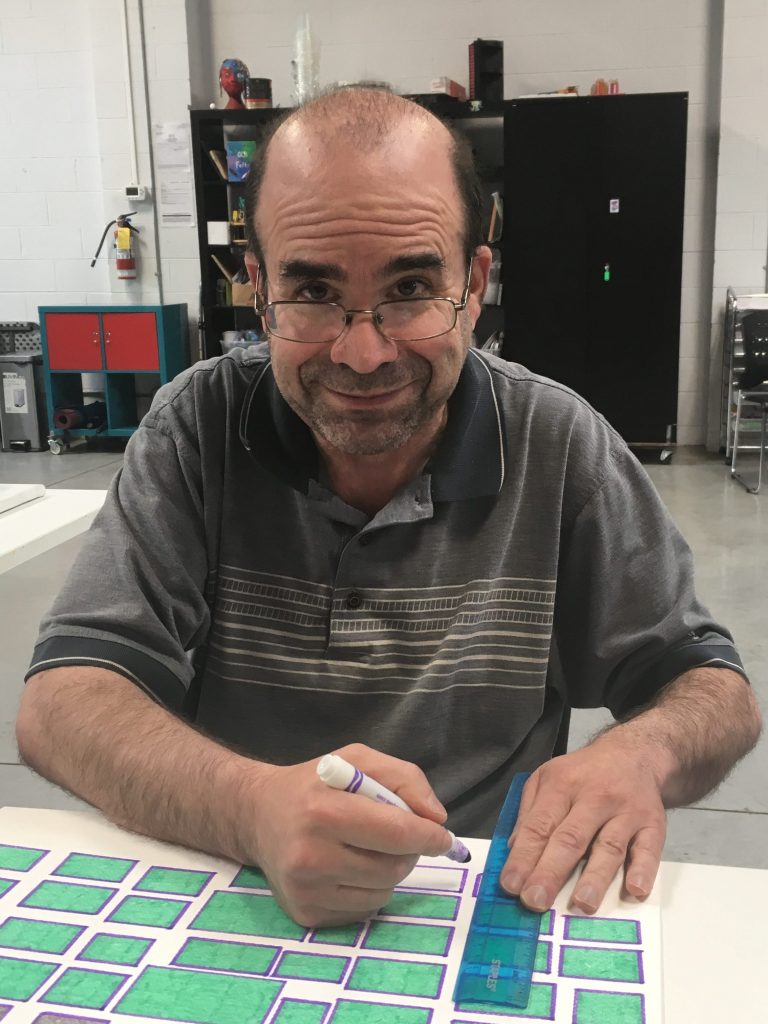 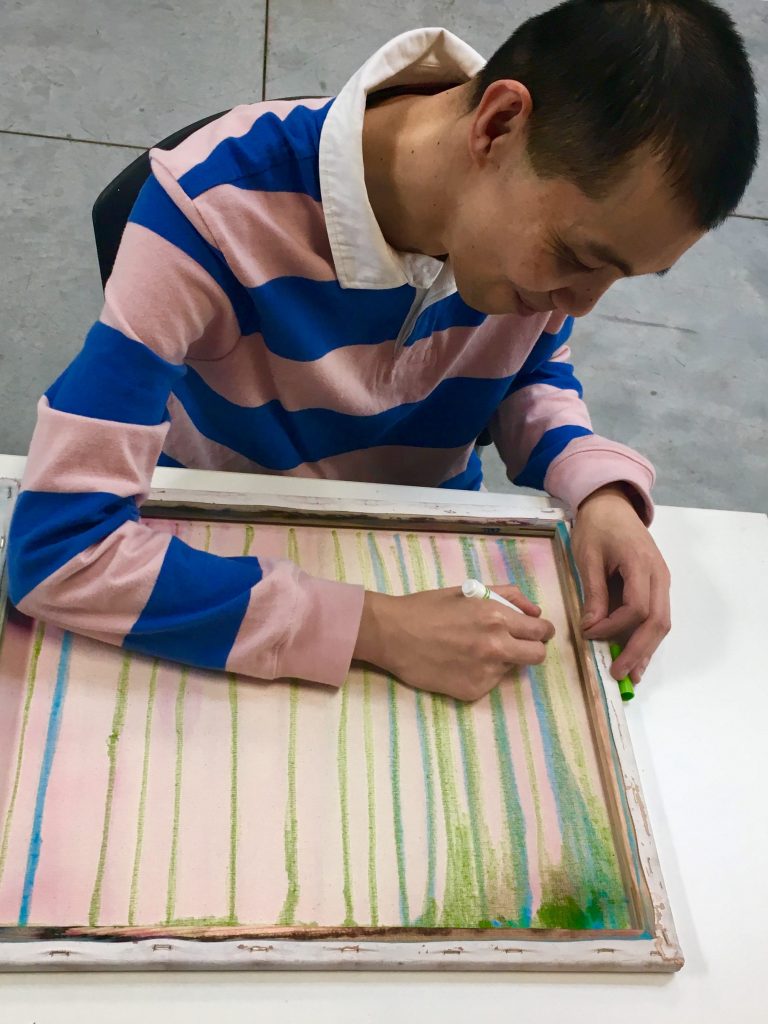 For the past six months, I have been working closely with two people named Mark and Chris. They both speak very little, often only responding with vague, one-word answers. I sometimes get the feeling that they are uncomfortable with verbal communication, so I keep it to a minimum. This affects how I approach art facilitation with them. I often work with them collaboratively in a way that emphasizes working by example, in a process-oriented fashion. The art, at least to some degree, is driven by the process of making it (in some ways intuitive and improvisational) rather than with a clear end-goal in mind. There are also certain open-ended but repeated processes that are applied during the creation of the works—for example, washing the works with water creates a different, somewhat unpredictable outcome each time.

At the core of my approach is a desire to locate what matters to them most when they make art with me.

I don’t necessarily mean subject matter or a direct autobiographical expression of feelings or personal narrative. Often, what comes up in the processes I am engaged in with Mark and Chris is abstract. Mark tends to be interested in simple geometric forms and Chris is drawn to jagged lines and branching structures. 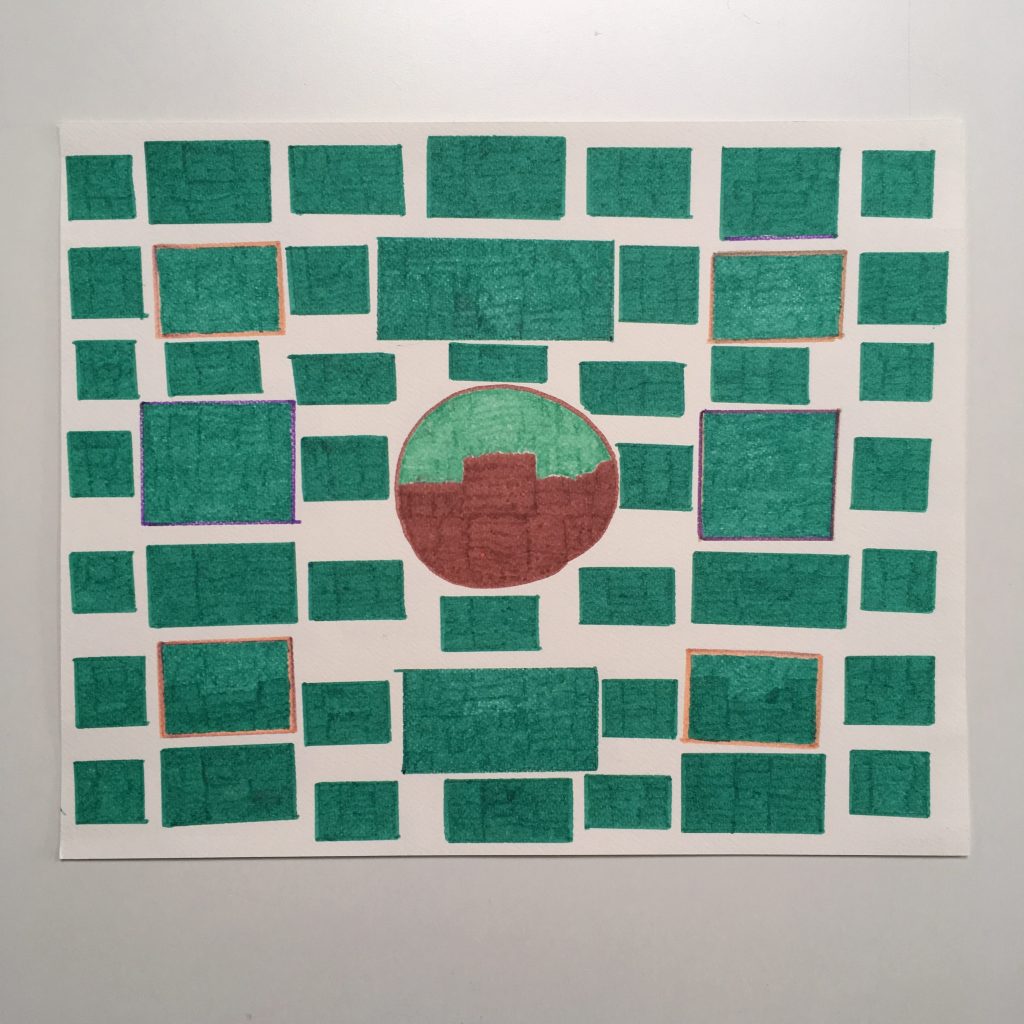 When I first met Mark, he was barely interested in making art at all. When he did, it was typically in very short spurts of activity with a lot of coaxing from staff. His work was usually an isolated geometric shape, and occasionally a person or a feature from a landscape such as a mountain, a body of water or a tree. In recent months, Mark has been quite focused, working for prolonged periods on works full of geometric shapes, often squares or rectangles with contrasting outlines, and occasionally other shapes such as triangles and circles. When he works with me, I offer verbal support and encouragement in small doses (I think he finds it uncomfortable if I speak too much) and let him know that geometric abstract shapes are totally valid as an art form as is his process-centered approach. I occasionally suggest he try out different colours and forms and I recently got him into working with a ruler as well as free hand. We also have more collaborative pieces we work on together. 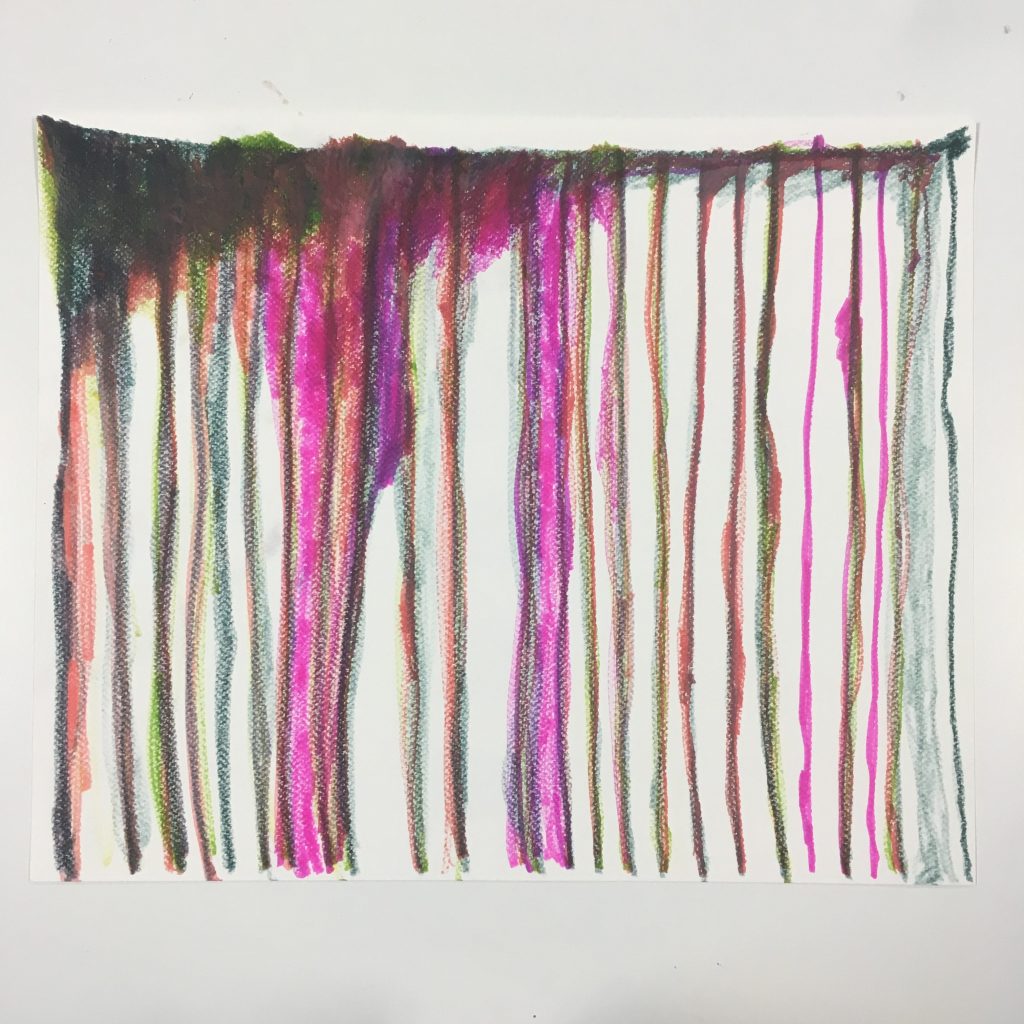 When I first met Chris, he was working with crayon on textured paper. One thing I picked up on right away was that these works never seemed to be finished, even though the paper was mostly or even entirely covered in dense layers of wax in many colors. He would apply crayon initially in the form of jagged lines that expanded into webs and gradually covered the paper. Often his first line would trace the perimeter, and then he would gradually work inwards, but occasionally he would get “stuck” for a long period of time repeatedly covering over a corner (wax was often densest on at least one corner of each work). I also noticed that he would work on them over periods of months or years; for him, the process of making them trumped the goal of completing an artwork.

Watching him work—the layering, the repetition, the movements he made—gave off a meditative feeling.

Sometimes this meditation was very focused, with Chris clearly looking at what he was drawing and placing his marks in a deliberate fashion. At other times, he seemed more focused on the physical feeling of applying the crayon and disconnected from any visual intention at all. There were also times when the application of crayon seemed less conscious visually or physically and Chris appeared distracted. He would look around the room, not paying attention to what he was drawing. It was like making artwork would sink into the background for him, the way you might absentmindedly tap your foot on the ground while paying attention to something else. I think all three of these “approaches” could be described as meditative to some degree, with varying degrees and directions of focus. 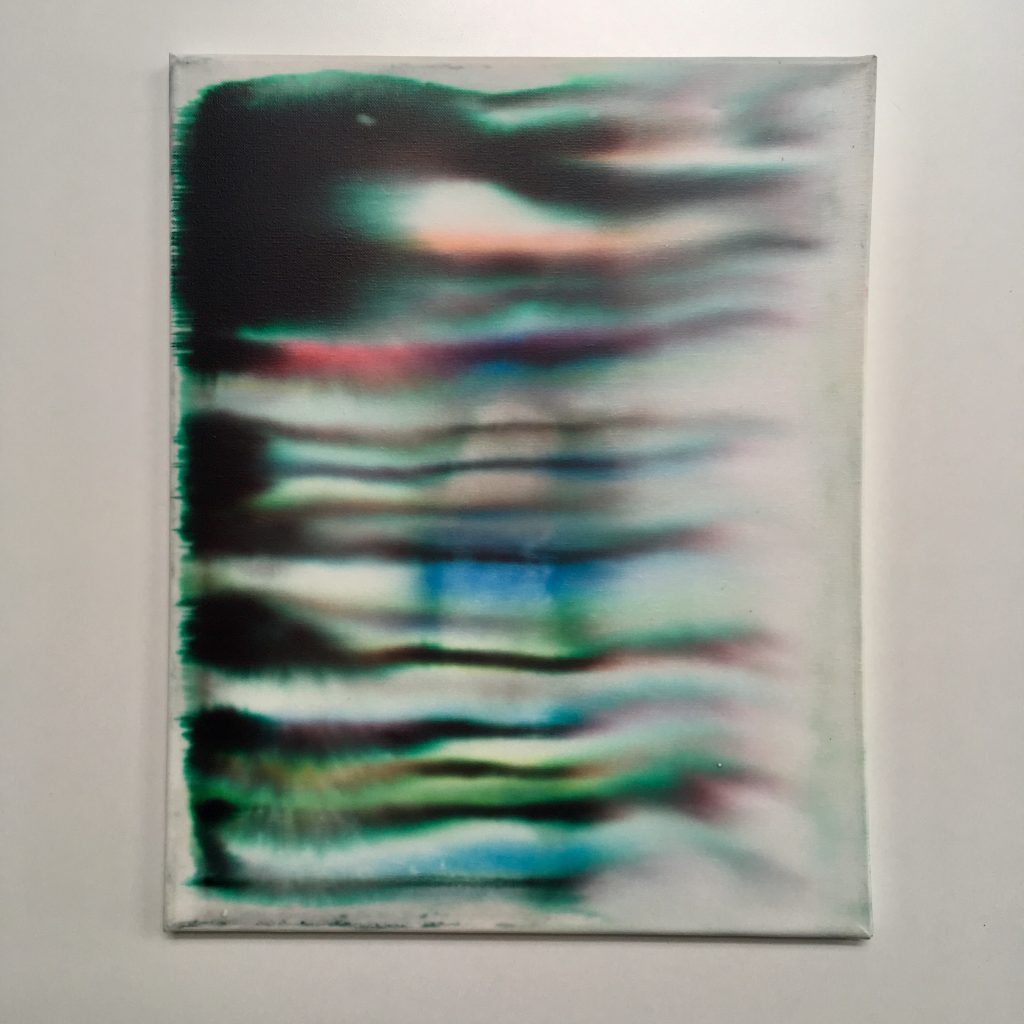 I have noticed that his use of jagged lines and web-like forms when drawing with crayons also applies when he uses coloured pencils, pencils and markers, but not when he uses paint. With paint, he simply covers the whole area without any reference to lines or webs. (It may have to do with the more fluid nature of paint and how Chris responds to that.)

When I work with Chris collaboratively, I try to honour this gradual, pattern-like tendency, but I also try to push it outside of what he usually does.

On his own, Chris will rarely complete a work and the density of mark-making has a tendency to cover over or mask its own subtleties and sense of development over time. I try to distill, develop and delimit aspects of this process with the goal of creating a finished work that references the non-goal oriented and non-narrative core of Chris’s process.

Because he can work on a piece over a prolonged period of time and often covers over his previous days of working, this process is not always clear. I try to make it less opaque by getting Chris to work with water-soluble markers on both sides of a porous canvas. Markers leave a stain, but this stain can be softened and washed partially away with water. I trace and wash out what he puts down in a repeated fashion that I believe emphasizes the temporal aspect of what he does naturally while at the same time clarifying it (yet paradoxically also blending it) somewhat, letting the layering and edges between the different moments of mark-making be more subtle. I also eventually coat the work in glue, usually when I feel it might be finished—when it feels on some intuitive level that the work has an aesthetic balance between looking like a developing process and a finished product. This increases some of those softening effects I mentioned above and also seals the work within itself, making it less responsive to things like water. It closes or completes the work, capturing a certain period of time, a certain intensity of activity, much like a photograph or a film strip. 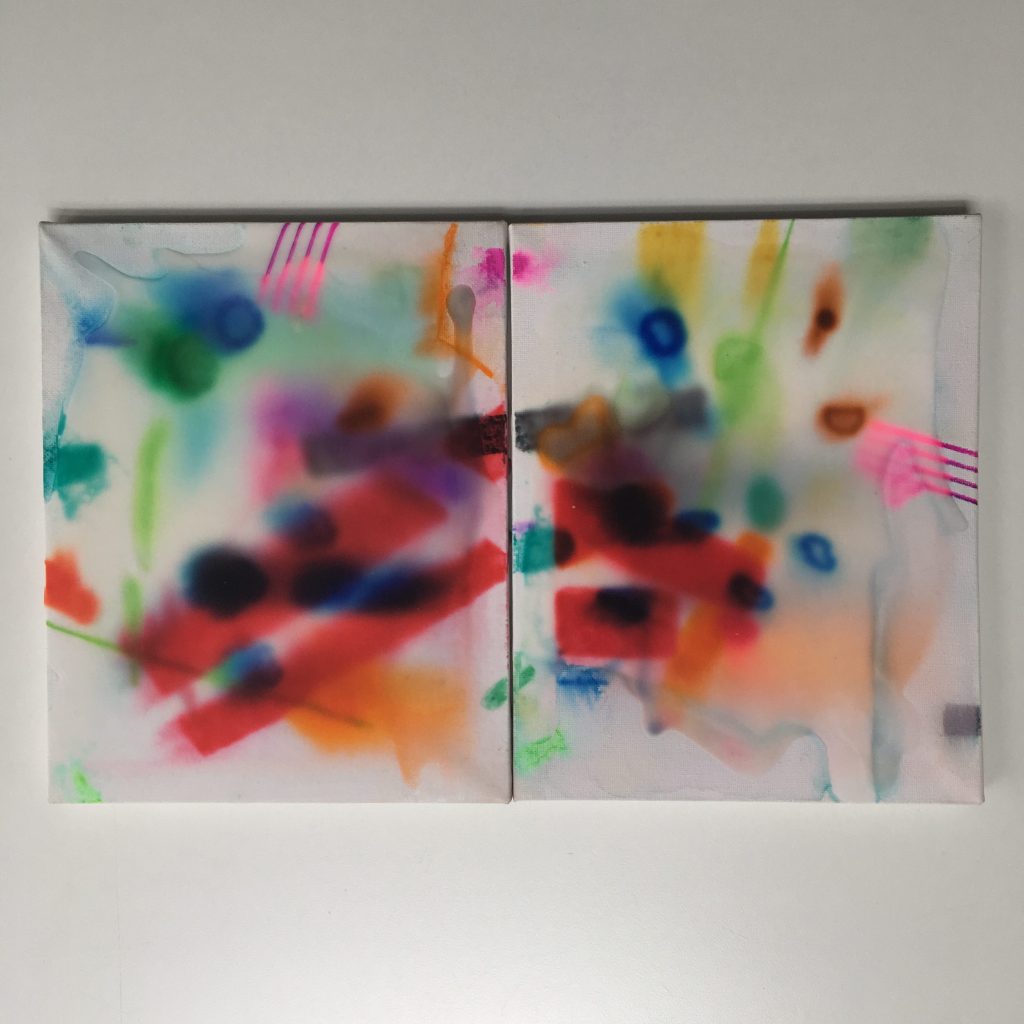 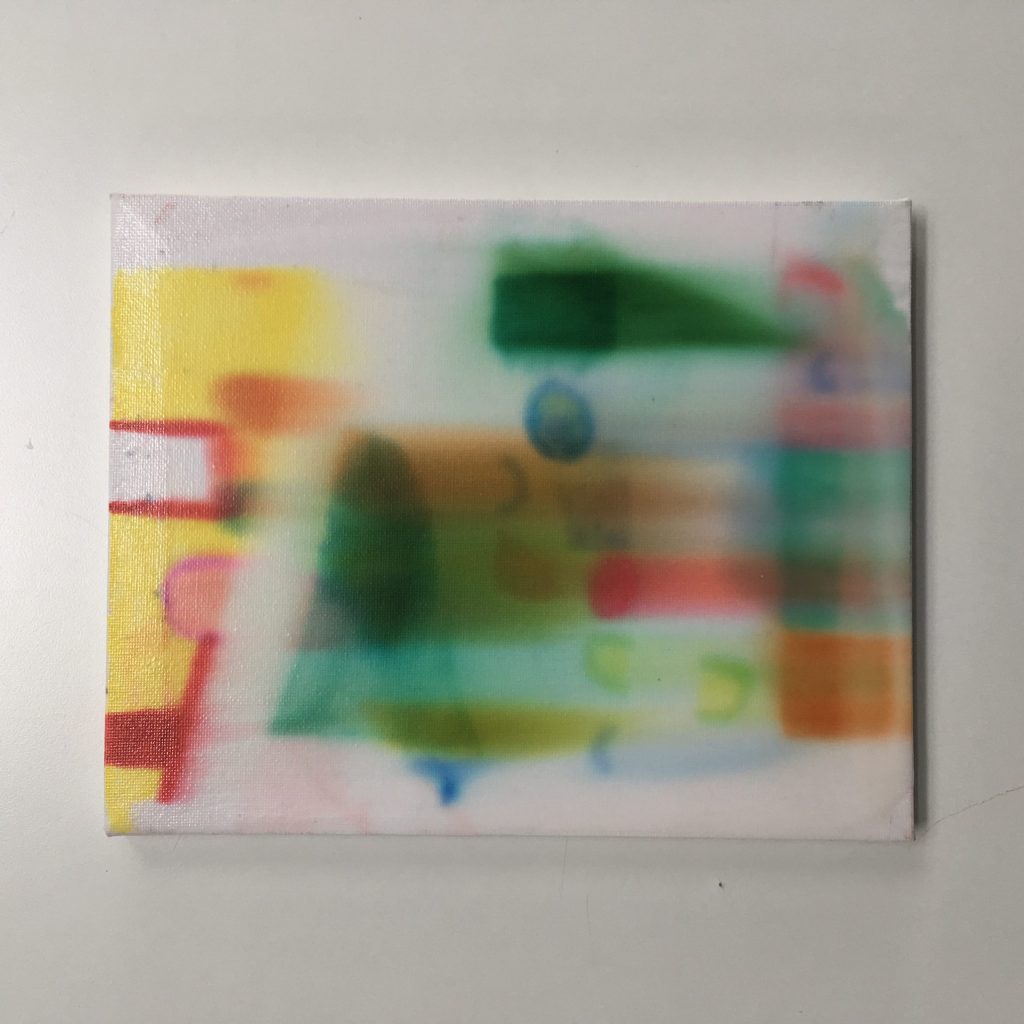 Some experiments with “painting” featuring Mark and myself. Glue, medium, Crayola marker, water, hand sanitizer, Dollar Store canvases. The work on the left was conceived as a modular pair.

When I work with Mark, I sometimes apply the same process, washing and blurring his geometric forms. The process tends to blur what was more distant in the work’s past and leave what was more present clear and boldly coloured. I’m also doing this to encourage Mark to think about using some more irregular and soft-edged forms in his work to create formal contrasts.

On a certain level, I see what is happening as educational, and I’m using the art-making process as a way to illustrate some ideas to Mark.

Because I know Mark is attached to hard edged geometric forms, there are works that I do not apply any water to and they are Mark’s to do with as he pleases. 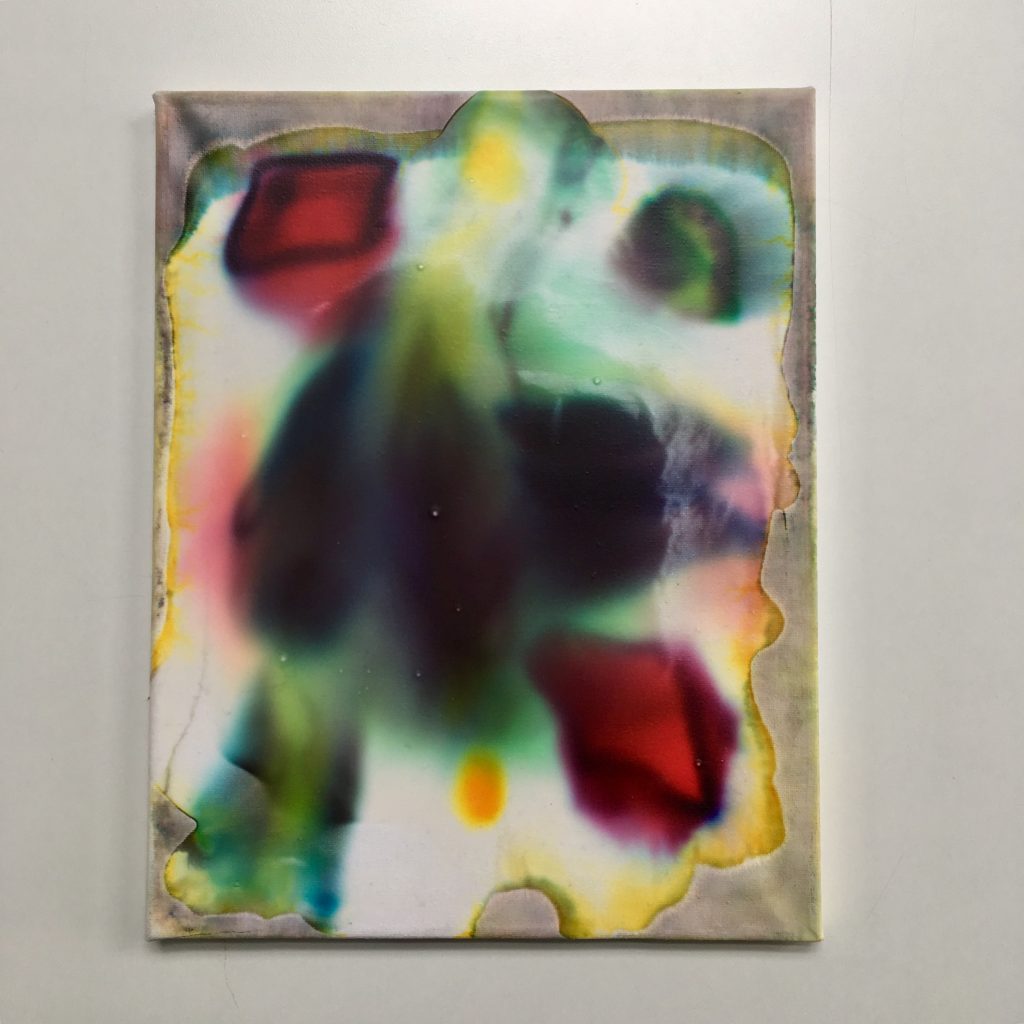 This is one of the more “painterly” pieces I collaborated/facilitated with Mark.  It’s largely made with Crayola Markers, water and white glue.

Mark also occasionally likes to work on canvases and paper Chris has already made some of his web-like markings on. Mark will work on these in a focused yet spontaneous way. It is encouraging to watch him work enthusiastically on these pieces; the relative messiness and asymmetry of Chris’ drawings act as a foil for Mark’s geometric tendencies, which he nonetheless works into the empty spaces between Chris’s markings. I like the formal tension in these works. Mark seems pleased with them too, as does Chris. Some of these works also get the water treatment as well. 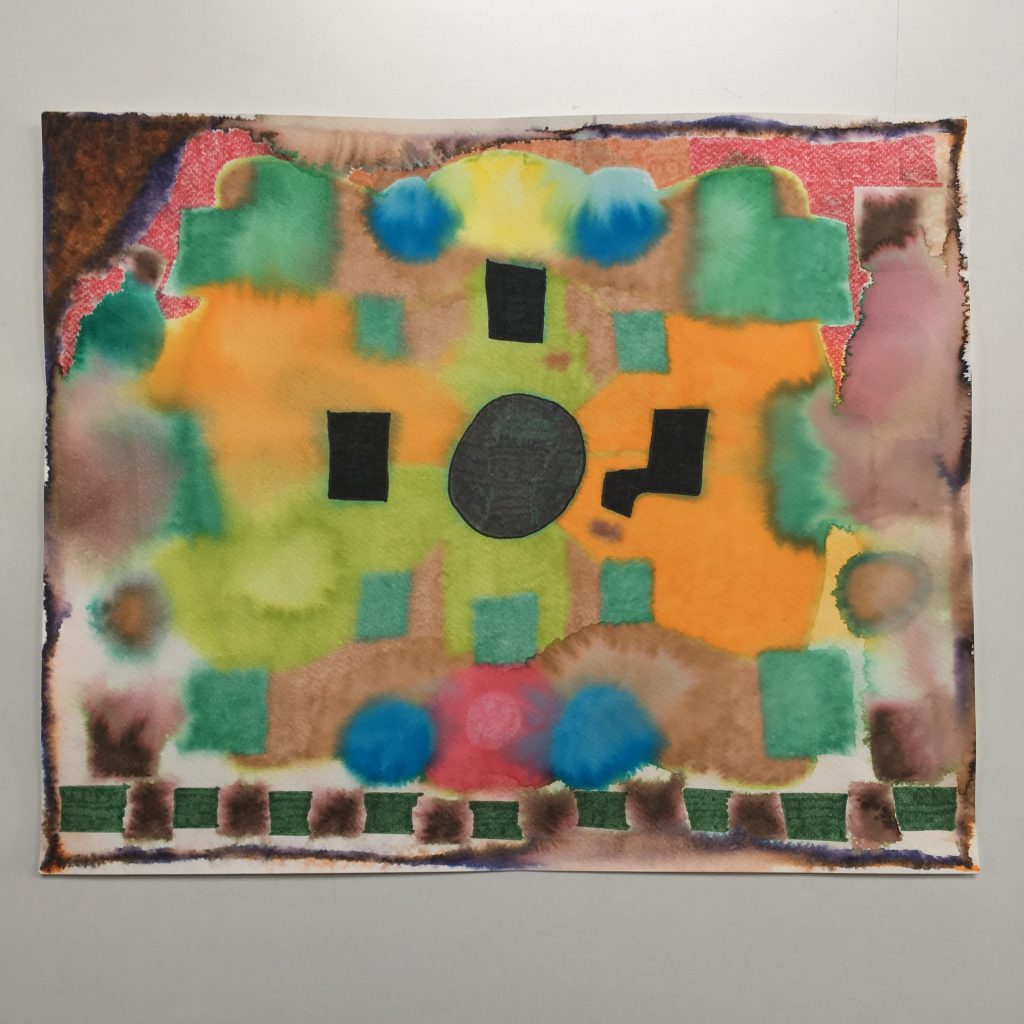 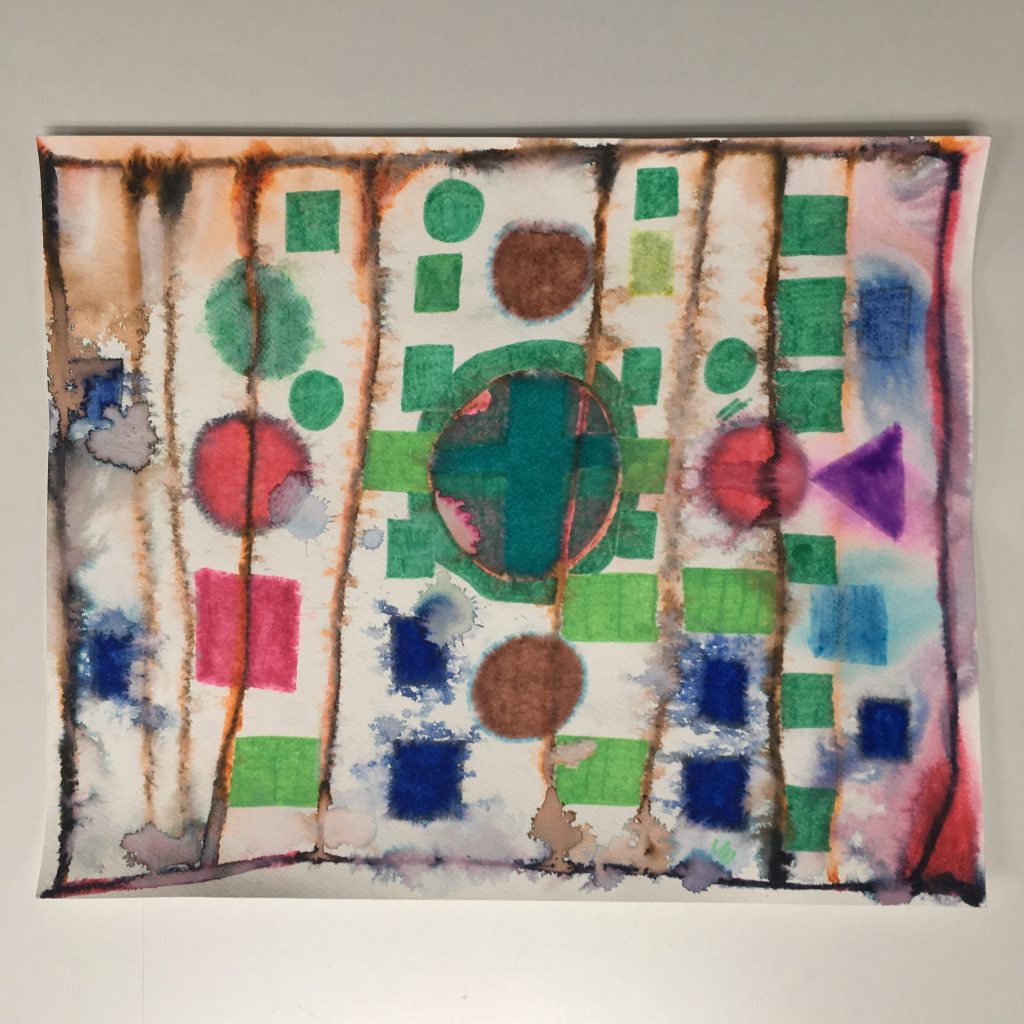 Collaborative drawings created by Chris, Mark and myself.

Another aspect that is present in my working with both Mark and Chris is chance, or rather, varieties of chance. The canvases themselves, depending on the subtle differences between them, respond differently to water and marker (and only predictably thus far to a certain degree). The markers, even though we generally use only two brands, do not always behave the same. Some stain more easily, some wash away more or spread out faster. The decisions Mark and Chris make are in some ways planned, in some ways intuitively or unconsciously habitual, but are also open to revision, improvisation, chance and accident. An unsteady hand or a distraction in the room can also affect the outcome of the work, as can the caprices of the water and the glue as it interacts with the markings and the canvas. Chance in all its varieties acts as a third actor determining the outcome of the works. We embrace this—we attempt to control it but we also surrender to it.

I believe that for Mark and Chris, aspects of their art are meditative. I also believe habit, intuition, some improvisation and minimal planning comes into play.

Neither of them speaks much about their work so its meaning is an open question. What I do with them tries at once to be educational, experimental, social and improvisational. Improvisation and music seem related to this work I do with Chris and Mark. Some people describe music like a language, and group improvisation like a dialogue between you and the other players. To a degree, I agree with this. But music is also unlike language because its significations can be more obscure, opaque, and open-ended than everyday speech.  Music, and some art, exists in a grey area between formless feelings and determinate meanings. In many ways, this is how I see this work I do with Mark and Chris: it is open to chance and accident, it is collaborative, process is more important than product, and the meaning is indeterminate (it is abstract and much is left unspoken) but the work can still nonetheless signify. In my facilitation practice, I try to honour this open-ended, hard-to-verbalize aspect that is at the core of Mark and Chris’s practices.