Our 15th Annual INCLUSION Art Show & Sale was a joyous, art-filled day. Artists and art-lovers came together in an event that celebrated creativity, community, and diverse abilities. From art demos, to live entertainment, to the hundreds of artworks in various mediums, there was so much to see. Here’s a look back at some highlights from this year’s event. 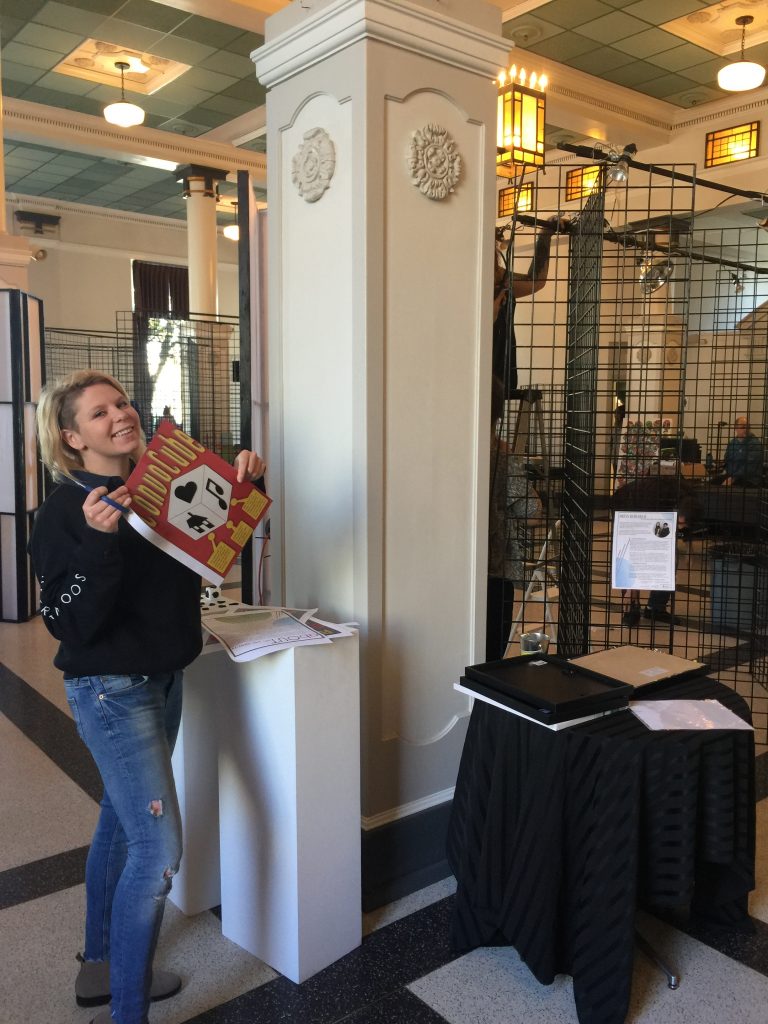 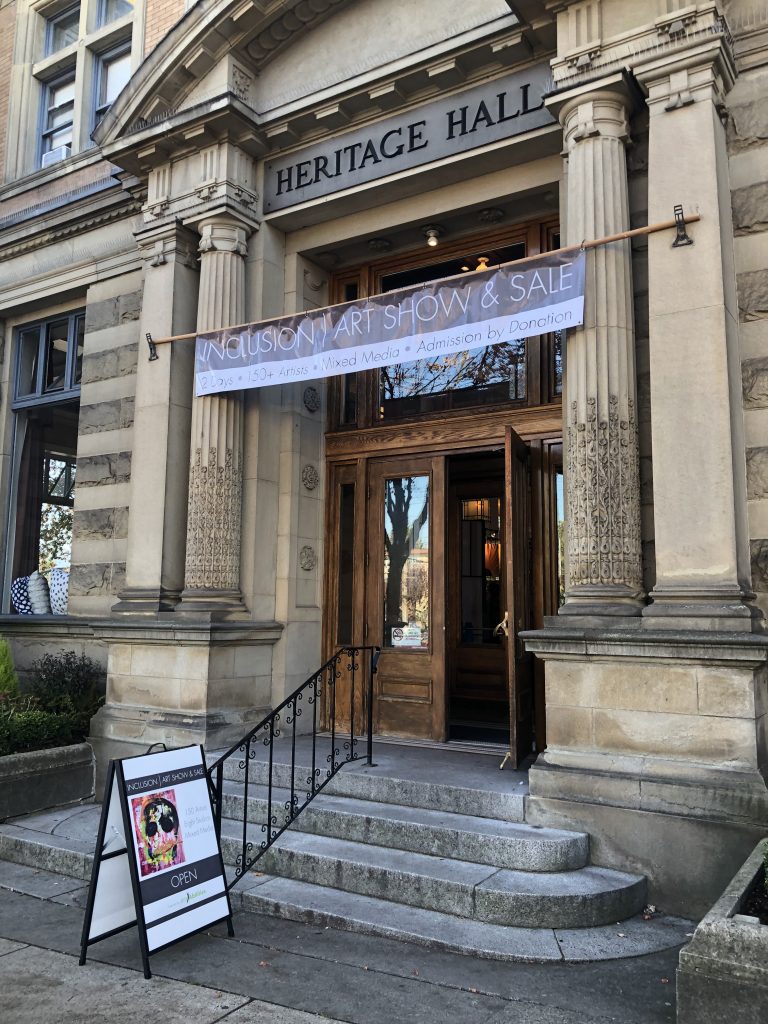 The doors of Heritage Hall open on the morning of the art show.

After many months of hard work and careful planning by the Art Show committee, things quickly took shape on setup day. This year’s show featured 950 original artworks, including: paintings, photographs, fabric art, jewelry, pottery, glasswork and more. The diversity of works on display meant there would surely be something for everyone.

From the moment the doors opened at 10:30 am, Heritage Hall was crowded with guests eager to browse the collection and mingle with the artists. The room was quickly humming with lively conversation. 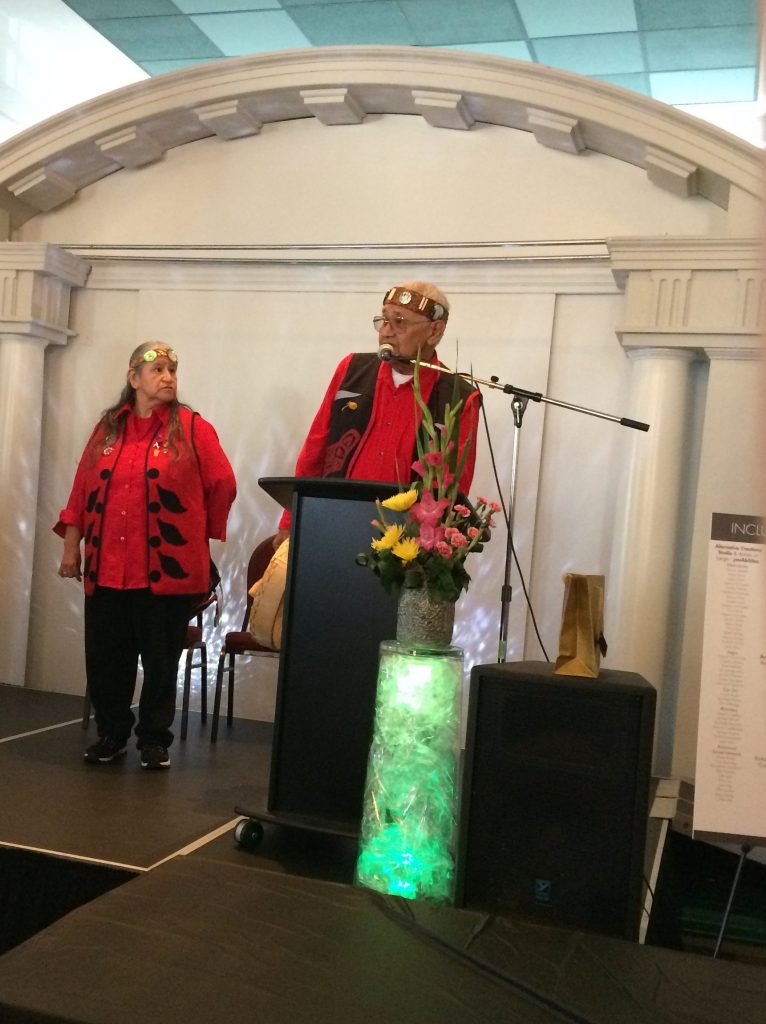 Esther and Joe Calder offer a welcome to the guests at the art show. 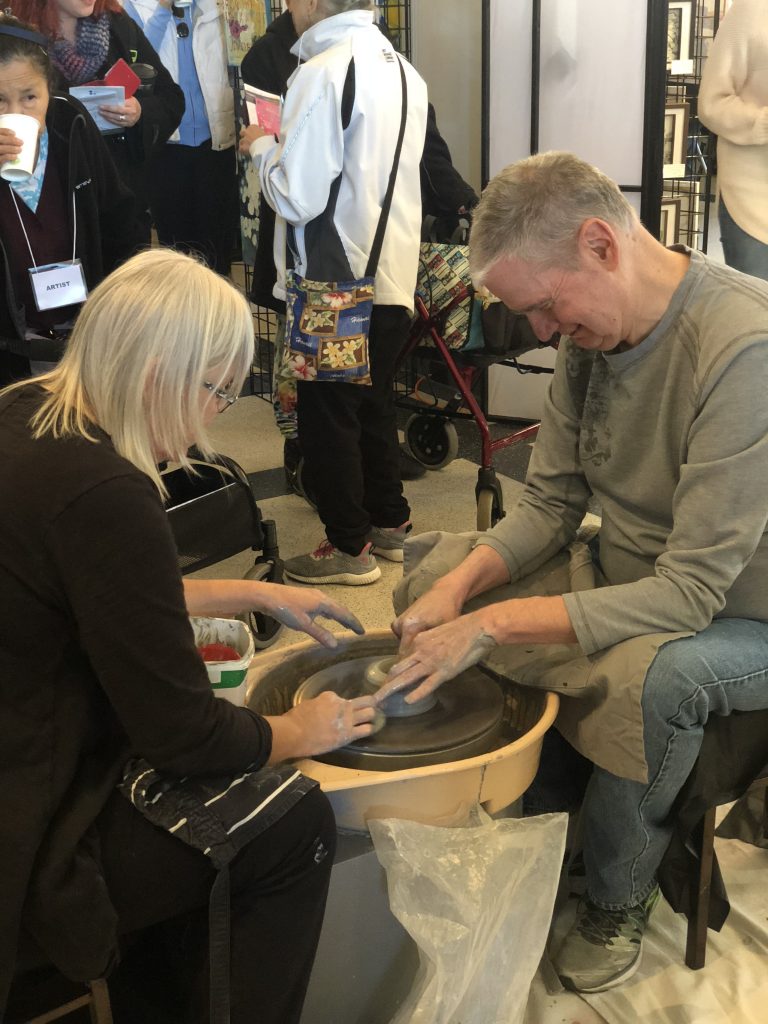 James Lash puts his hands to the pottery wheel during his art demo.

To open the show, Esther and Joe Calder offered a traditional Indigenous welcome and song. Joe Calder graciously shared stories about his family’s history and how his grandmother taught him the songs he and Esther shared with all of us at that morning. Soon after, the first of the live artist demonstrations began—pottery wheel throwing with James Lash from PotteryWorks.

Art quickly began disappearing from the displays as guests carried off and purchased their favourite pieces. Stage Door’s steampunk-inspired works were particularly popular. Stunning city and landscape paintings of Vancouver and beyond also wowed visitors. For those looking to get a head start on their holiday shopping, there were fantastic collections of cards, wreaths, and other festive decorations.

A few lucky winners also walked away with door prizes. 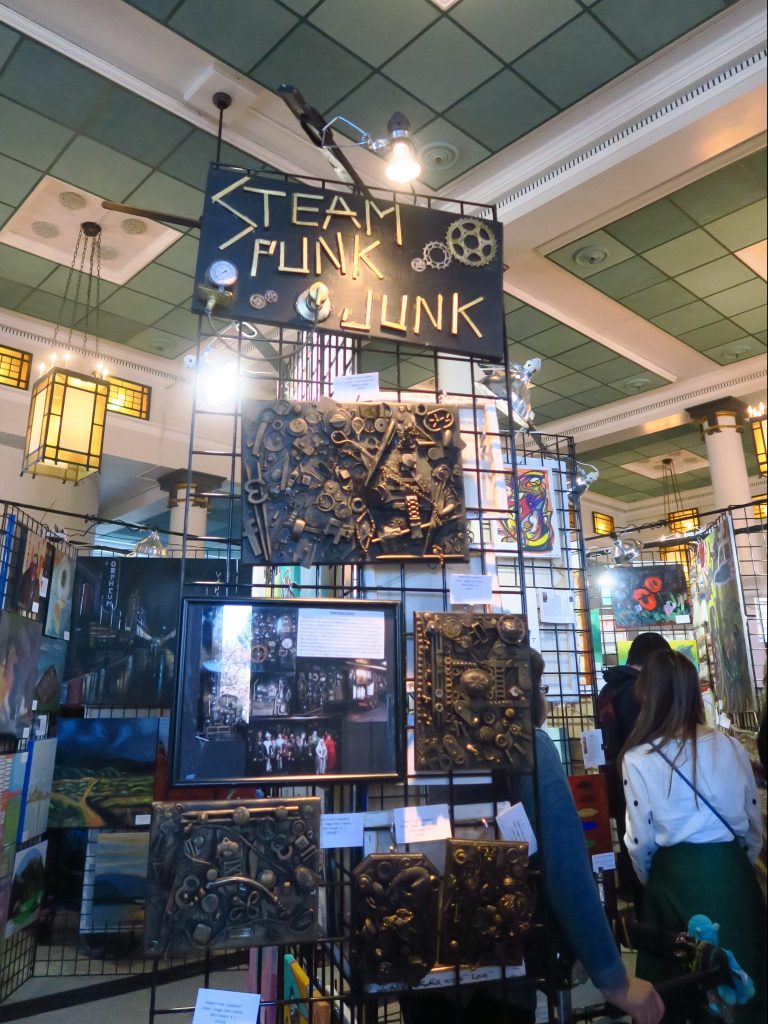 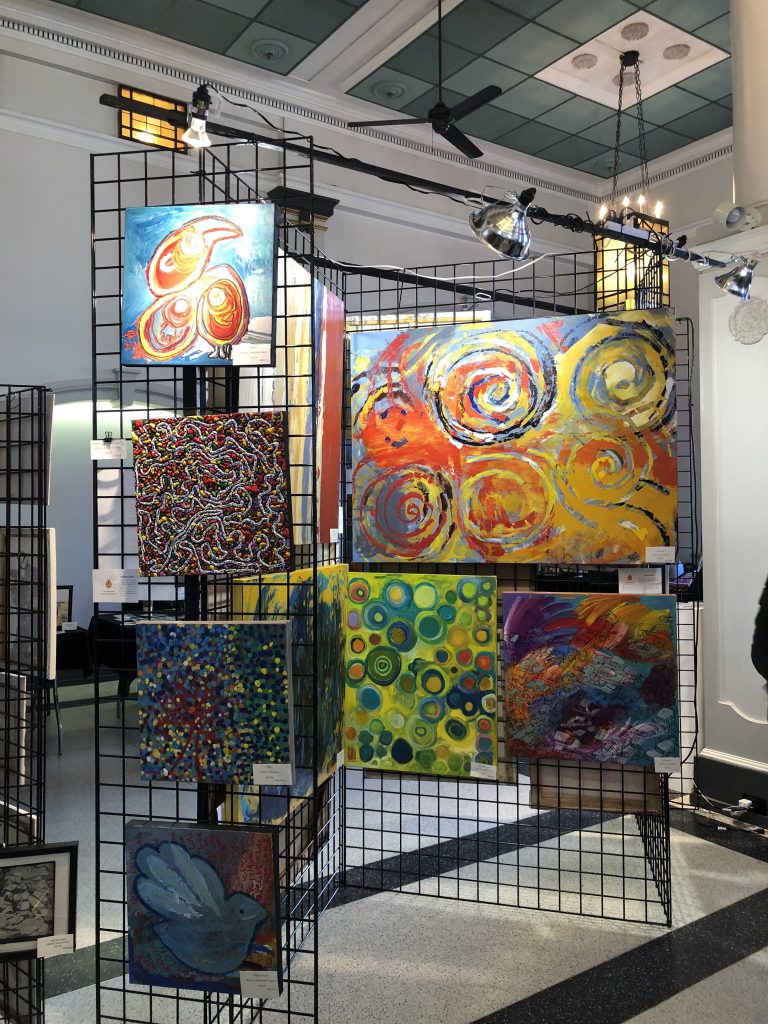 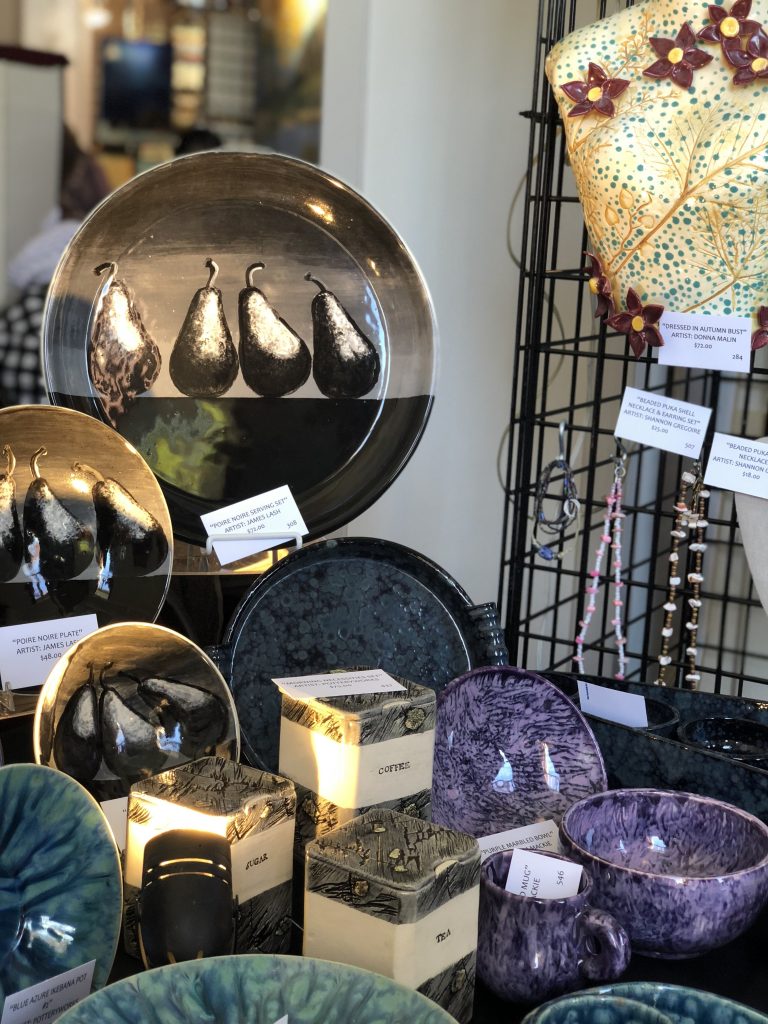 One unique feature of this year’s show was the abOUT Art and Identity display. Earlier this year, posAbilities and abOUT collaborated on a project which brought together people with and without intellectual disabilities who identify as LGBTQ+. The display showcased the three works that came out of the project: The Gift, an album produced by Colin Darge and David Gorodetsky featuring Colin’s music; Dress Rehearsal, a drag photoshoot by Peter Nguyen and Hannah Franes; and the ConvoCube, a game designed to facilitate conversation created by Marissa Riebesehl and Jacob Brennan. 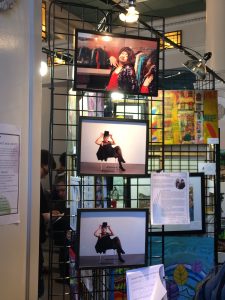 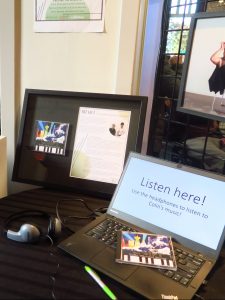 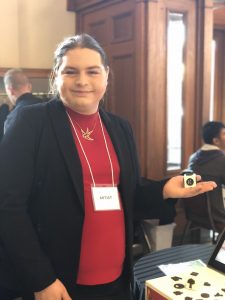 Marrisa poses with the “ConvoCube”

Marissa kept busy, explaining the rules of the ConvoCubes and how they were made to interested guests. Visitors continued to interact with the cubes and spark new conversations throughout the day. Meanwhile, Colin’s CD got a lot of play at the listening station—we even spotted some dancing!

An Afternoon of Art Demos and Performances 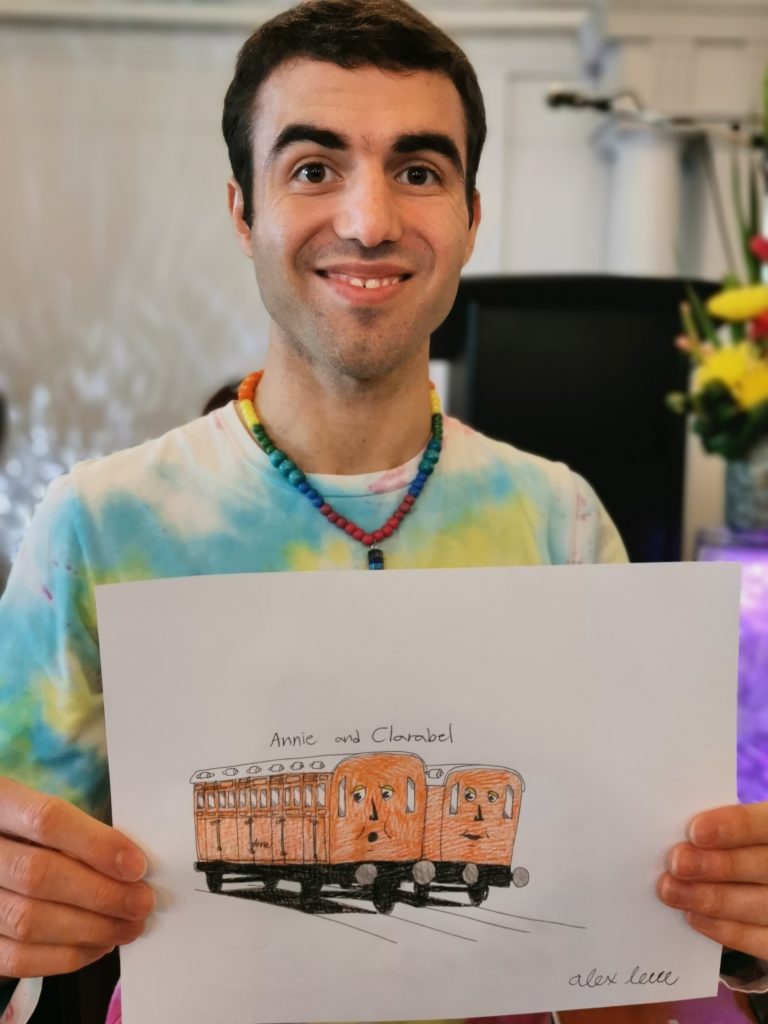 Alex Lecce, holding his finished drawing at the end of his art demo. 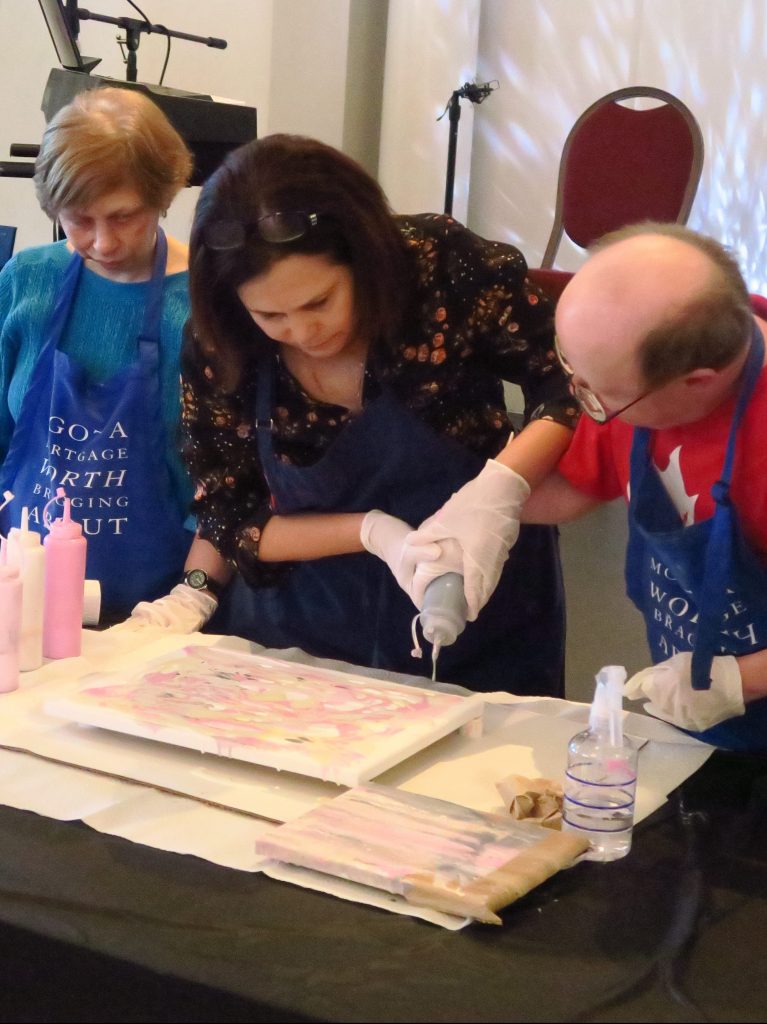 Sandra, Ericka and Philip from Stage Door demonstrate the art of paint pouring.

Alex Lecce was happy to talk to guests during his art demo, as he guided us through his creative process from initial sketch to the final, full-colour drawing. The day’s last demo, paint pouring, demonstrated the messier side of art.

Throughout the day, several talented performers took to the stage. Skilled local pianist Manuel Hii delighted the crowd with a selection of popular songs and Broadway hits. Later, Dixon House took to the piano, lending a jazzy atmosphere to our evening program. Ben Simcoe, singer and impressionist, was also a hit among guests, performing renditions of a couple classic tunes.

Wrapping Up the Evening Heading into our evening program, an influx of new visitors brought renewed energy to the show. With drinks and desserts making their way around the room, everyone was in high spirits as night fell outside. 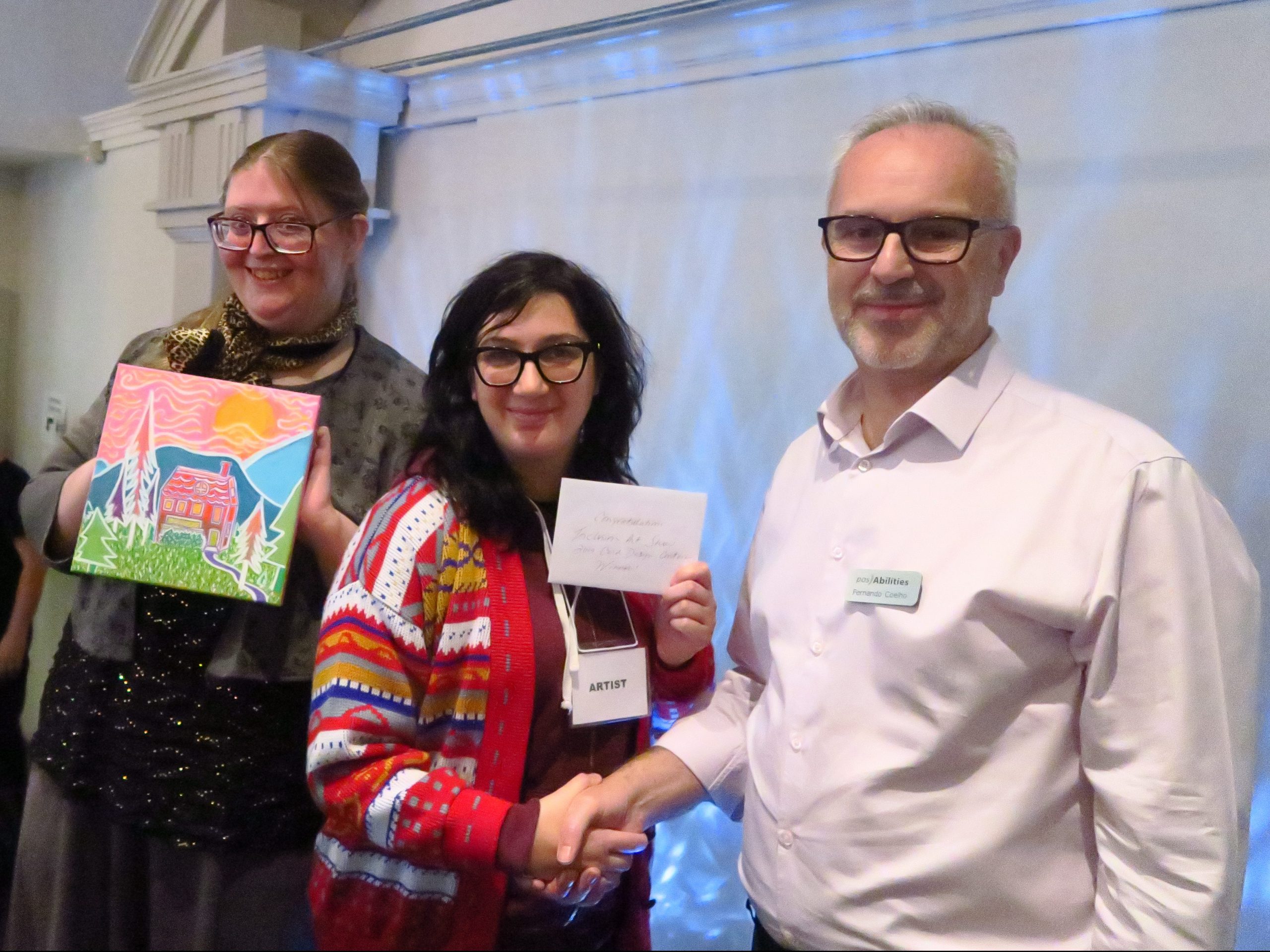 Autistic artist Margaux Wosk won our Art Card Design Contest with their home-themed painting, “Lush Backcountry.” In the past couple years, Margaux has paired their art with activism. They hope to break down negative stereotypes and open up conversations about what people on the spectrum are capable of.

Emcee Lara Gunkel, in her closing remarks, spoke enthusiastically about what a wonderful opportunity the annual event is to show our community what people of all abilities have to offer. This year marked a milestone for the INCLUSION Art Show & Sale—it was the show’s 15th anniversary. Year after year, the show demonstrates the ability of art to break down barriers and perceptions of disability.

And special thanks to all those who organized, volunteered, or participated in our biggest event of the year!